The renowned Zurich architect André Studer built the Lassalle-Haus in 1968-69 according to the principles of harmonic design & architecture - you will notice that mathematical similarities of architecture, music, religion and also astrology flow throughout the house. Just as in music, the building’s proportions have been designed to be in harmonious relationship to each other.

Studer’s works were influenced by the pioneers of modern architecture. He completed an internship with Le Corbusier (Charles-Edouard Jeanneret) in Paris during his architectural studies at the Swiss University ETH Zurich. In addition, Studer was fascinated by the works of Hans Kayser and maintained a lifelong friendship with the American architect Frank Lloyd Wright – three people who inspired him considerably. 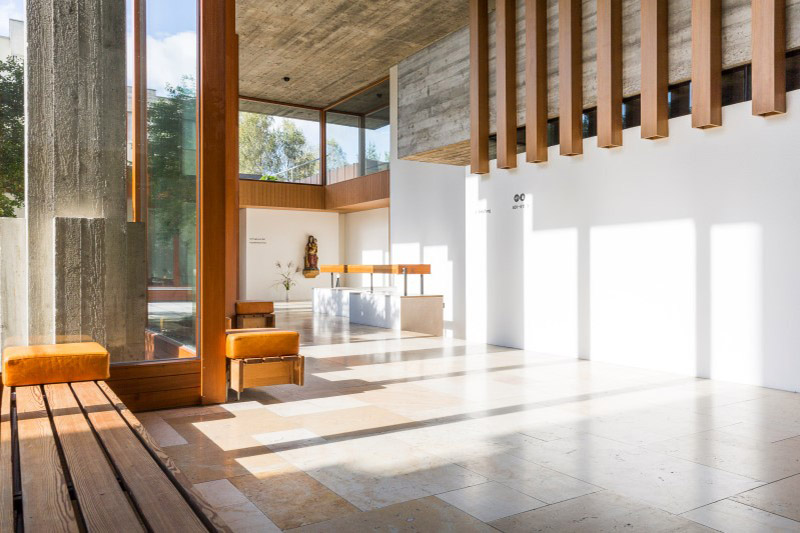 The basic measure of Studer’s buildings is the length of the human foot, which corresponds to about 30 cm; all measurements are multiples or fractions thereof. The proportions, which provide a harmonic melody, were determined with the help of his monochord (an instrument with only one string). According to Studer, as a result, the building has its own unique sound which resonates with people’s feelings.

Georg Frey, architect and former Monument Conservator of the Canton of Zug, describes the architecture of the Lassalle-Haus as follows:
“We can approach the Lassalle-Haus from different directions, with gradual transition from the natural environment to the structure. The interiors of the building are connected in many ways with the outdoor spaces. In front of the main entrance, we enter a small courtyard, creating the intimacy of the building. Elsewhere, there are ramps, stairs, canopies, and overhanging parts of the building that connect the interior with the exterior. The Lassalle-Haus creates a sense of openness without losing the sense of comfort. It does not protect itself with walls, but welcomes, giving us time to transition between. This sense of openness continues inside. Halls, stairs, ramps, galleries and corridors form a spatial continuum that is diversified and makes it possible to experience many paths. As we walk through the house, we walk through a series of distinctive spaces that allow both movement and calm alike. The rooms may lead us, but the direction is not clear. Similar to a sculpture, all areas of the Lassalle-Haus are unique: The gardens, the cemetery, and the courtyard, with terrace and pond. The articulated building with its differently designed facades. The interiors with different room qualities. Gardens, buildings and interiors form, as in the case of a piece of music, a thoroughly-composed unit that is harmoniously embedded in the landscape. Inside, the rich sculptural design contrasts with the limited variety of building materials. Exposed concrete elements, plastered surfaces, natural stone, wood, and glass characterize the rooms. The limited number of materials balances the wealth of spatial relationships. The experiences with the architecture of the Lassalle-Haus are sensual. The human scale and the physicality of the architecture can be felt first hand. The complex spaces radiate a calm that is stimulating. It is a strong architecture that is not constraining, but open.”

The park, designed by the renowned Zurich landscape architect Josef A. Seleger, seamlessly integrates with the Lassalle-Haus. "The dimensions of the building (Lassalle-Haus) are designed according to principles of harmony. As soon as you enter the house, it begins to sound. I tried to carry out these harmonious sounds in the outdoor space," says Seleger," as I was inspired by the charisma of the place, its plants, and its architectural history." (Cited from: Anthos No. 3, 2005, pages 52-55)

Josef A. Seleger integrated the historic old trees of Bad Schönbrunn into the landscape of the newly constructed Lassalle-Haus. The old sequoia trees in the area of ​​the Old Villa, the multi-trunk tree of life,  and the row of chestnut trees, which used to be an avenue, pay respect to this history and contribute to the park’s unique atmosphere. 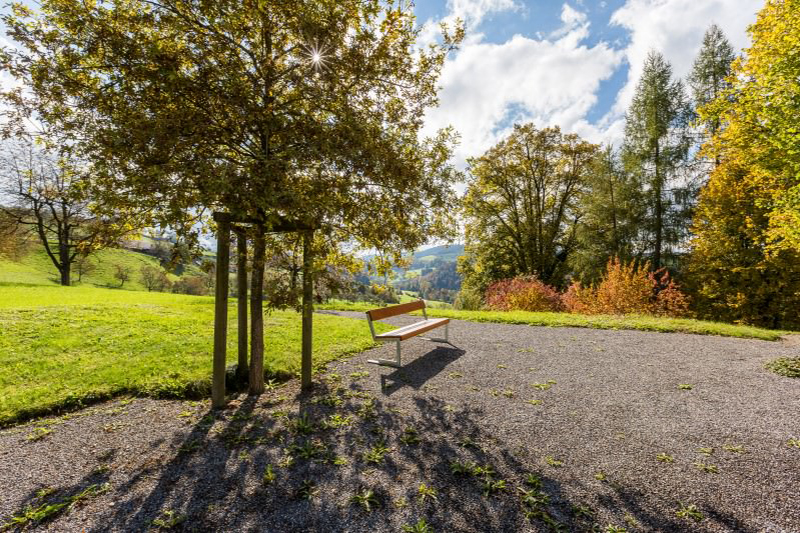 Various walking paths lead around the house, through the forest, and to the nearby rolling hills with impressive views of Lake Zug and the foothills. Park benches, sheltered retreats, four ponds, old trees and a labyrinth invite you to go for a walk – which compliment the reflective programs conducted at the facility.

Our trees, shrubs and flowers are indigenous to the region - with the exception of the two sequoias (genus Wellingtonia) located next to the Alte Villa (“Old Villa”), and originate from the western slopes of the Sierra Nevada in California. These sequoias are from the early days of the property. One of the trees, reaching 47 meters high, is one of the tallest of its kind in Switzerland.